Determined to make the most of our time in Fiordland, Keates and I rose early and got straight on the road. Heading into Queenstown to buy some sturdier hiking gear, we made our way down state highway 6 and 94 to Te Anau, a town set in the heart of Fiordland.

As I said before, the Dutch had cursed us and it rained pretty much the entire way down, so no opportunities for countless photographs which was very disappointing… however, something I learnt about this area is that it rains for about 200 days of the year and receives about 8 metres of rainfall. So you can’t exactly go expecting sunshine and lollipops.

If anything, I think the rain adds to the experience… as Keates described it, the land is raw. We came to the distinct conclusion that we could have been walking with dinosaurs as the landscape is quite prehistoric. 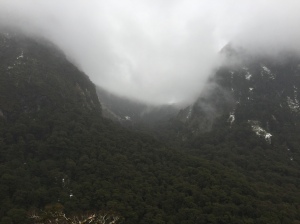 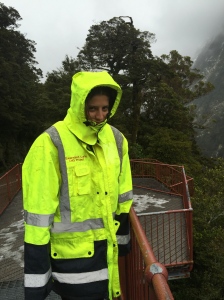 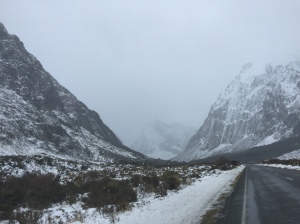 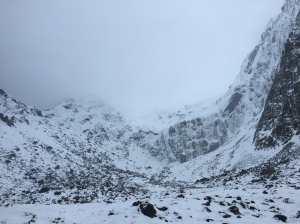 From Te Anau to Milford there is one road you can take State Highway 94, which winds its way through soaring peaks and lush rainforest. The stretch is 120kms long, and without any fuel stops between the two towns, make sure you have a full tank before heading in.

When you get to Milford, there is literally nothing there, aside from a cruise terminal, cafe and information centre. We had originally planned on walking the Milford Track tomorrow for a 12 hour hike however our hopes were dashed when we discovered that the track can only be accessed by boat at the Milford end… or back in Te Anau.

There was one accommodation point also, the Milford Lodge, which looked really good and was reasonably priced however, unfortunately had no vacancies so we were a little bit stuck. We decided that we would try Gunn’s Camp (which the receptionist told us about) but if they were booked we would have a night in the car.

Gunn’s camp is about halfway between Milford and Te Anau and is also the closest civilisation to all of the walks so it actually turned out to be a good thing we were so disorganised. Run by a lovely couple who job share with another couple, Gunn’s Camp was this cool and very basic lodging with a lot of history from the area instilled in it. For $65 bucks we got a little cabin with bunk beds, a sink and a fire.

I loved it, it is so basic and rustic and along the road to three of the main walks in the area. Unfortunately we messed around a little too much during the day and didn’t have time to hike much that afternoon because the rain had set in and we lost sunlight very early but we managed to have a look at the beginning of the Lake Marian track, the Humboldt Falls tracks. I regret not doing the full lake track but we left it all too late.

Settling in for the night, all we had to eat was some chicken noodle cuppa-soup which we managed to spread out over two cups while we played chess in the main building area. Deciding that it would be a good idea to turn in early as we knew tomorrow would be a challenge, what with the rain and the 10 hour hike we had planned.