My alarm went off at 4.30 this morning… opening my eyes I could hear it pouring down rain outside…Keates and I made the collective, sleep-induced and unspoken decision to ignore the alarm and get up when we felt like it… which turned out to be at 5.30.

Getting changed under the doona because our fire had burned out and our once cozy little hut was now an ice-box… we put on some wry smiles, falsely positive attitudes and our trekking shoes. It was pitch black, pouring with rain and freezing cold. Choking down a poorly planned breakfast of mandarin and muesli bar, we hopped in the car and drove the 5 minutes to the trail head of the Hollyford track.

For two hours we trekked in the rain and the dark… with our little torches shedding a circle of light on our surroundings… lighting up rocks and creeks and mud as we literally tramped our way through the Hollyford River Valley.

The only people we met on the track was a group of four hunters… slightly intimidating experience when people appear around the corner cradling rifles. Once the sun came up, the trek was marginally more impressive… winding up beside the huge Hollyford River and passing mountains with waterfalls pouring out of the side all over it became quite impressive.

However, aimlessly trekking is not quite as fun as it seemed… it is much better to have somewhere to get to rather than hit our time limit and turn around, it made it quite disheartening because there was no breathtaking view to turn around at.

After four hours of slogging, we turned and the heavens opened up on us… my Timberlands (not designed for trekking) filled with water and surprisingly I enjoyed the walk more. Dense rainforest and pouring rivers made it quite adventurous and I must admit, mildly hilarious… especially when the only food you have consumed all day is a few mandarins, two muesli bars and a bunch of nuts. 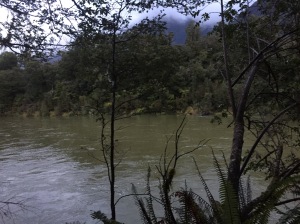 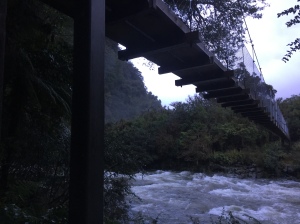 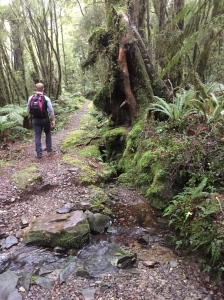 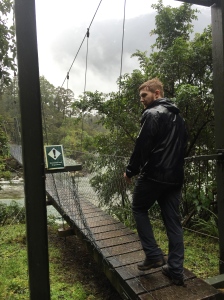 By the end, I can certainly say, that 7 hours in the cold and rain is not the best way to spend a day but definitely made for a good story, and a slight sense of satisfaction at it’s termination. Heading back to Gunn’s we got changed and running low on petrol headed straight for Te Anau for fuel, a coffee and a steak sandwich… all things were necessary before conversation between us could be made.

After being rained on for about 8 hours, as soon as we left the sound and got into Te Anau, the sun was out and the beautiful clouds were up to their old tricks again… much to my relief. 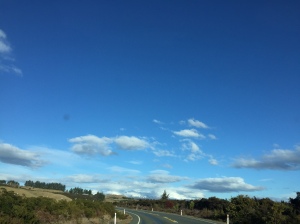 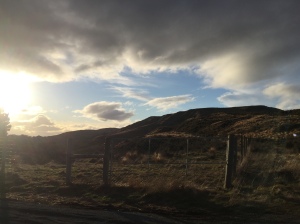 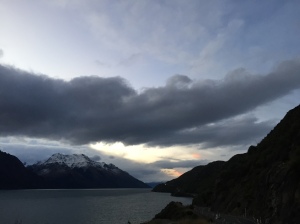 The final leg of my New Zealand trip was approaching… the part I was looking forward to the most… the Bungy jump at the Nevis. So on we drove to Queenstown, staying at the Top Ten Holiday Park, probably the most comfortable we had been in days.